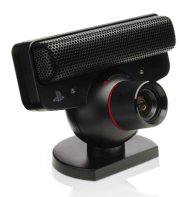 The PlayStation Eye is the successor to the PS2's EyeToy, and is noticeably superior to its predecessor. Sporting a higher-quality camera and built-in microphone, the PS Eye's dominant use has been for video chat via PSN.

Video Chat can be accessed from the Friends column of the XMB (Xross Media Bar), outside of regular gameplay, and with the built-in microphone on the Eye, there is no need for a seperate bluetooth mic. The microphone can also be set as a default chat input device for multiplayer games, working as a passable substitute chat mic if needed.

PS Eye is on the Move

The PS Eye has generally been a little used accessory, by most PS3 owners. Sony is hoping that changes with the introduction of the PlayStation Move this coming September.

The PS Eye is a required part of the PlayStation Move, visually tracking the colored sphere on the controller. This allows for a more precise measure of control than would be obtainable by only using the accelerometers in the Move controllers.

The combination of the PS Eye and Move controller yields a 1 to 1 read of your motions, including the ability to read depth or, distance from the screen. This should result in the most accurate motion control gaming available.

PS3 Games - Many PS3 games make use of the PS Eye and there is even a subsection of downloadable titles on the PSN store specifically for the PlayStation Eye.

EyeCreate - EyeCreate is a free application on the PSN store that functions as a video/photo capture and editing suite. This can be used in conjunction with Firmware 3.4's video upload features to great effect.

Games that use the PS Eye in unique ways.